about
how to play
tournaments 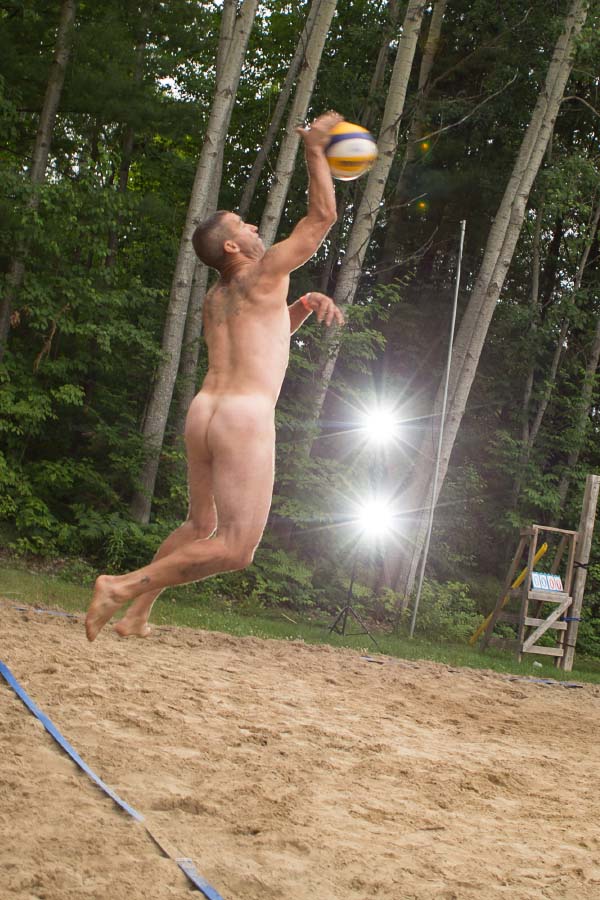 About Nude Volleyball in Naturism/Nudism

Nude volleyball in naturism/nudism has almost become a cliché. The game was in invented in 1895 by William G. Morgan, an instructor at the YMCA in Holyoke, Massachusetts, USA. By the 1920’s, naturists were playing it regularly, making them some of the earliest adopters of volleyball. In some ways, the game was ideal for early naturist clubs. Most clubs were small and a volleyball court doesn’t require much space. Yet despite the relatively small court, many people can play at the same time. The game also allows for differing levels of athleticism which makes it inclusive.

The equipment required (a net and a ball) is very affordable. Finally, since there is no need for a team uniform or protective equipment, volleyball is perfect for people who like to be nude.

Volleyball is a complex game requiring specialized skills. The ball is spiked from up to 60 cm above the height of a basketball hoop (about 3.65 metres) and takes fractions of a second to travel from the spiker to the receiver. That means the receiver must assess incoming angle, decide where to pass the ball and then control their pass in the blink of an eye. A purely rebound sport (you can’t hold the ball), volleyball is a game of constant motion.

But volleyball is also a game that is accessible to many people of differing abilities. One can play and enjoy the game regardless of age or level of physical fitness. During the summer, games are usually played at 2pm on weekends and the regulars will happily show a new person how to play. During tournaments, one can join a novice team and even a new player has a chance to be on a winning team.

Rules are set/adjusted by the referee at the start of the game. If there is no referee, the convener may set/adjust the rules for each match.

The ball is served into play, either underhand or overhand, from behind the back line. A serve may hit the net as long as it goes over.

Team X gains a point if:

Teams can also try to block the opponent’s spike as it crosses the net. During a block, the defending team may contact the attacked ball in the opponent’s side of the net. A block into your own court counts as one of your three touches in beach volleyball, but not in hard-court volleyball.

There are six players per side on the court in a hard-court match, who each must rotate one position clockwise every time their team wins back service from the opposition. A Beach Volleyball team typically has two players. Our main tournament is 6 on 6 but there are often mini tournaments of 2 on 2 and 4 on 4.

Teams score a point on every rally (rally point system), regardless of which team served.

Matches are played best of three or five sets. Sets are played to either 15, 21 or 25 points as determined before the start by either the referee or the convener. A team must win a set by two points. There is no point cap, so a set continues until one of the teams gains a two-point advantage.

Game Uniform: All players must play nude. (all divisions, all levels, all ages) After all, this is a naturist park.

From May to September, casual fun games are usually played (weather permitting) every Saturday and Sunday at 2pm and competitive 2 on 2 is played at 1pm.

Everyone is welcome to join in!

Don’t know how to play?  That’s OK, the volleyball aficionados will happily teach you.

Where to play naturist volleyball

date to be determined